More great work from Josh Robertson at ABC news Brisbane on this report on UM’s mass of evidence deprived police complaints about me.  UM’s dainties wasted the time of federal and state police forces reporting me for criminal ‘harassment’ for criticising their public promotions of the UM scam. When the Brides of Serge didn’t succeed in having me harassed and jailed, they then plotted to heavy a NSW police detective assigned to investigating about 30 of these baseless complaints.

I’ll be blogging about this story with a little more info shortly. The TV report is on YouTube.

Universal Law on the stand

Paula Fletcher is set to begin her soul-full journey of answering to the NSW Office of the Legal Services Commissioner about her ‘at best unprofessional’ conduct. On 26 June 2019 Justice Lonergan issued court orders to commence the process of referring her to the OLSC for investigation. There’s some bureaucratic steps to go through, but at the hearing, Justice Lonergan referred to Fletcher’s aggressive badgering of me around the time my father died, and on the day of his funeral as ‘disgraceful’.

Only a couple of incidences of Fletcher’s conduct were brought to the attention of Her Honour. That was in the context of my argument on the rate at which Benhayon should pay my legal bills. There were many more instances prior and post where I reckon Fletcher’s conduct fell well below a professional standard. She put all of it in writing, so I’ve made my own complaint to the Commissioner. It’s been referred to the Law Society of NSW for investigation, and they now have a big bundle of documents to examine. The process is similar to a legal proceeding. Fletcher will be asked to respond. A range of disciplinary options are available depending on the Commissioner’s findings. The process is likely to take a year or more.

I will certainly announce the outcome.

Which reminds me, if anyone is wanting updates on anything UM related, it’s best to follow me on social media. I don’t have time to respond to every message I get.

Despite having a retreat scheduled to run at the Sound Training Centre, Tytherington, near Frome in May, court certified cult leader, Serge Benhayon, shifted the thing to Vietnam and had his hench-Brides lean on ticket holders to keep that to their innermosts. Oops. The bunch of other workshops scheduled for June were relocated to some cut-price function rooms on Arcturus, with the Sons of God under strict instructions not to gentle-breathe a word about the whereabouts of ‘The One’ and his money-grabbing entourage.

Around Northern NSW, Sergio has made himself scarce, and refuses to take questions from the press. But as much as he tries to lay low, he really does struggle to keep a handle on his hubris. I mean, if you want to be inconspicuous, why ponce around in a white, late model Porsche 911? Of all things. If he wants to be invisible why not drive a Nissan or something?

I guess there’s plenty more cash where that came from. Yes Serge?

I don’t know how long the mendacious messiah plans to operate his unjustifiably lucrative business in secret, but it seems a waste that his followers donated well over £2m to build him and Simone their high spec low rent commercial premises at Tytherington. He’ll have to front up there eventually, surely?

So what if the UK press is waiting for him? It’s not like he hasn’t run the gauntlet before.

As the Ballina police squadron said, ‘if you don’t want to answer the questions, don’t’, lol.

Either way, a committee of concerned people in Frome have formed the Frome Universal Medicine Information Network (FUMIN) to keep an eye on the cult and its fiery UK activities. Well done to them! They have a website and you can follow them on Twitter.

In the meantime, to hell with the Supreme Court’s findings, it’s bogus biz as usual at the Goonellabah headquarters and the Wollongbar Church of Serge. Esoteric Women’s Health continues to relentlessly flog Esoteric Breast Massage and all its other gropey habit forming, privacy invading dreck, marketed as women’s ’empowerment’. Even more ’empowering’ to women is UM’s consistent non-disclosure of its surrounding controversies, depriving customers of the right to make an informed choice about whether or not they want to be love-bombed into an occult molestation and death cult. And to protect Natalie, the world’s least convincing sexpert, from having to answer to the public and the press, they’re keeping the venues secret.

Unimed Brisbane is UM’s mini compound in Fairfield, with a bunch of live-in esoterics servicing Serge Benhayon and Susan Scully’s mortgage. Sara Harris and Bianca Barban continue to push Universal Medicine’s bogus therapies through their Living Stillness set-up in Viewbank, Melbourne, and Sara is running a sideline in tapping into women’s menstrual insecurities with her irksome ‘Follow your flow’ stuff on Instagram and Twitter. Whenever you see the words ‘community initiative’ and ’empowerment’ on anything UM related, it’ll be some recruitment drive or other targeting the vulnerable. Eg. the Girl to Woman old blokes’ photography festival.

There’s no reason why authorities can’t shut this lot down. There really is no basis for any challenge to any authority that does so based on the Supreme Court’s findings, but my expectations remain low. Thankfully Professor Dwyer of Friends of Science in Medicine continues to publicly advocate. But he can’t do it on his own.

You can help by writing to your state and federal MPs and health ministers. The jury understood what UM is. Ask why the health authorities haven’t acted to protect the public from UM, and what our public representatives plan to do about it. 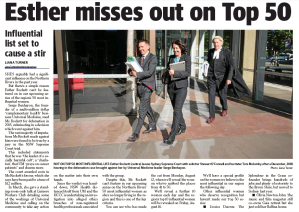 Finally, the Northern Star ran a half page article last week explaining why I won’t be listed among Northern Rivers’ 50 most influential women.

It’s because I don’t live there, silly!

One of our UM accountability bunker compadres reckons it’s to halt the ‘what about Esther?’ questions from readers as the paper names the region’s movin’ and shakin’ femmes. Which might become a bit irritating for the Northern Star editorial staff, and the legitimately eligible candidates. I no longer live in the region. 😀

And I never knew of the gong, or expected to be considered. But thank you to the Northern Star for giving the Benhayon v Rockett story a great run, and thanks to all my supporters in the area and beyond. I’m very humbled by all the love that’s come my way!

As I always say, there’s more to come. 😉