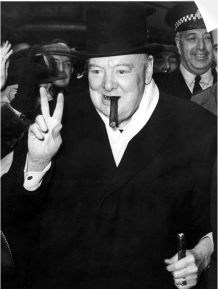 V is for victory 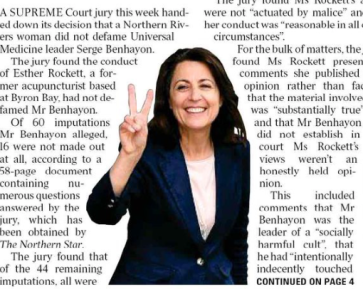 Former Sydney tennis coach turned self-styled spiritual healer Serge Benhayon has suffered a spectacular loss in his Supreme Court defamation case against a former client, after a four-person jury found it was true to say he led a “socially harmful cult”, “intentionally indecently touched” clients and made “bogus healing claims”…

Ms Rockett’s solicitor, Stewart O’Connell of O’Brien Solicitors, said the verdict was a “victory against a Goliath organisation by a woman who refused to be bullied” and was a “vindication of Ms Rockett”. Sydney Morning Herald, 15 October 2018

Update: You can download a copy of the Supreme Court’s final determination at this link: https://www.caselaw.nsw.gov.au/decision/5c772e44e4b0196eea404c09#

I’ve also published an article on how to use the court’s orders to protect your community.

November 2015, Serge Benhayon commenced defamation action at the Supreme Court of NSW, Sydney. He claimed I’d damaged his reputation by defaming him in one blog post and one tweet. I filed a defence in February 2016 relying on the defences of truth, contextual truth, honest opinion and qualified privilege.

September 2016, after failing in application to strike out some of my defence, Benhayon expanded the action by claiming I’d also defamed him in another 17 subsequent tweets. I filed an amended defence in November 2016 using the same defences for all publications.

December 2016, two of Benhayon’s associates, Ray Karam and Caroline Raphael started their own defamation action in the District Court of Queensland in Brisbane and so on (I ran out of money, did work of solicitor myself for over a year, appeared at interlocutory hearings in two states, went bankrupt etc.).

The trial of Benhayon v Rockett ran for six weeks from 3 September to 15 October 2018 before a jury.

In the end Benhayon sued me for 20 publications. He claimed that 60 defamatory meanings (imputations) were found in those. The jury found only 44 of those meanings were conveyed. Of those, three (dishonest, leader of socially harmful cult, and preys on cancer patients) were repeated across several publications. Therefore, there were in fact 40 imputations conveyed in total.

The Uniform Defamation Laws provide a defence of justification (s. 25, Defamation Act NSW). It is a complete defence if you can prove the material published was substantially true. This means that even if an imputation is found to be defamatory, the publisher is not liable if the imputation is proven to be true in substance or not materially different from the truth. This can be difficult to prove as you can only use evidence that is admissible in court – this means that you will need original documents and/or witnesses who are credible and willing to testify in court. Arts Law Centre of Australia

I proved, with evidence, in the Supreme Court, those meanings to be true.

A big win on truth

Among the imputations which were covered by Ms Rockett’s truth defence were statements that Mr Benhayon “engages in inappropriate conduct towards women”, “is guilty of inappropriate behaviour with children”, “is not a fit person to hold a Working with Children Certificate” and that Universal Medicine is a “socially harmful cult”. Mr Benhayon has denied all allegations of wrongdoing. Northern Star, 14 November 2018

Benhayon is not in a position to deny what was proven in court. The following is the complete list of the 36 imputations proven true. (You can download a copy of the list at this link.)

A further 3 imputations pleaded by me were found to be conveyed by the matters complained of and were proven true.

The implications of serious allegations proven true – what’s next?

Benhayon can never sue anybody ever again for repeating any of the above allegations.

The proceeding concluded at a hearing on 28 February 2018. There was no argument about the jury’s decision and no appeal. Benhayon was ordered to pay my costs on an indemnity basis. The court’s final determination has been published on the caselaw.nsw.gov.au website.

Some people are asking whether Benhayon will be charged with criminal offences as a result of the court’s finding. The answer is no. The proceeding was a civil proceeding, not a criminal proceeding. For any further action to occur requires people to come forward with complaints. Various legal remedies are available depending on the incident – criminal action, civil action for damages, and actions by regulatory authorities to limit certain activities.

Any member of the public may use the court’s determination to make notifications about any UM activities of concern.

But nothing will happen if people don’t act.

Organisers of The Girl to Woman Festival, now in its fifth year, declined to answer questions from The Northern Star.

They have instead issued a statement, saying the event’s organisers had been subject to “continued harassment” on social media.

In the statement, they said “false information” and “moral panic” about the event had been circulating online.

“We are aware that the Festival is being attacked on the grounds of a jury’s findings regarding a civil defamation action taken out by Serge Benhayon, founder of Universal Medicine, in relation to prolific blogging about him and his organisation,” the statement said.

“The Girl to Woman Festival is not in the position to comment about a court case that is still officially in process.”

The statement confirmed The Girl to Woman Festival is “primarily run” by Esoteric Women’s Health, and that this organisation was founded by Natalie Benhayon.

“Esoteric Women’s Health openly cites Universal Medicine’s extensive teachings on health and wellbeing as a foundational inspiration, yet it remains the case that Universal Medicine is not the organiser of The Girl To Woman Festival,” they said. Northern Star, 14 November 2018

The court case had concluded by the time that statement was published. The only remaining argument was about costs. The organizers of the Girl to Woman Festival are company directors, employees and contractors of Serge Benhayon’s Universal Medicine businesses. All the Festival’s volunteers are UM cultists.

UM’s promoters have learned nothing from the court’s decision, and are determined to carry on business as usual, and continue to do so without proper disclosure of who they are and what they are selling.

Recent media coverage is revealing the extent of UM’s underhanded infiltration of community organizations and political groups. Those who’ve been paying attention to my accountability campaign for a while are aware that authorities have consistently failed to protect the public from UM’s aggressive recruiters. Media coverage has been the best means to inform members of the community about the risks and harms of UM. However, the media interest will not last. In most places where UM is active there has been no media coverage, or not enough people saw it. UM will regroup, and the harms will continue.

I’m more aware than most of how many people have been very seriously affected by UM’s Esoteric ‘Sons of God’. For some that has been life threatening. Others have been physically, emotionally and financially devastated. It is finally safe to speak up. UM’s aggressors will now run into very serious legal problems if they harass complainants. If victims don’t come forward the harm will simply continue. UM will continue to prey on vulnerable members of the community and the Supreme Court’s finding will be just another piece of paper.

I can’t do any more than I have done. And after six years, it’s time for me to rebuild my own life.

The time to come forward is now.

What’s next for me?

I’ve been just as busy since the trial as I was before and during. I’m working on the next level of the accountability project – finishing what I started. There’s still a lot of work to do tying up loose ends. The Raphael & Karam v Rockett proceedings in Queensland went away.

You won’t see me online as much from here on. While we have media interest I’m helping with that. The big news orgs have a lot more reach than my little blogs. I strongly believe media coverage helps give victims the courage to come forward. The authorities and the public will not get a proper idea of the scale of the harm until they do. For those considering it, remember, there are plenty more like you, apparently waiting for others to speak up. Every person who comes forward will help someone else find the courage, will help others to feel less alone, and help others to heal. Every person who comes forward will help to stop more innocent people from being caught in the same nightmare. I can tell you there is nothing more empowering than doing something that helps others. But as I said, the opportunity to really expose UM could soon pass. I’ve got no assets – zero financial security. I have to move on and get back to earning a living.

I could not have won this case without the support I received – every cent contributed, every word of encouragement, all the information, time, work, care and kindness you shared. You all helped me to see this through on behalf of those who could not. My family were especially awesome, and of course my brilliant legal team who backed a bankrupt who could never afford to pay any of them. Tom Molomby SC came on board in 2016, Louise Goodchild joined last year, and then Stewart O’Connell and Peter O’Brien of O’Brien Criminal & Civil Solicitors in Sydney from April 2018, helping with the critical preparations for trial. To get this result without that help would have been impossible.

Also a huge thanks to the jury for their incredible service to the community and for their intelligence, concentration and patience through the trial. Thanks especially to the injured juror who pushed through pain to get to court. My team and I really wanted to help, but unfortunately it was against the rules to communicate with her. I’d like to thank her for her perseverence.

The best bit for me, has been all the wonderful people I’ve gotten to know over the past six years. And those of you have been paying attention for a while know, despite the dark and unsavoury subject matter, we got to have a little bit of fun along the way.