Serge Benhayon was also recorded telling an audience about voices he heard while sitting on the toilet. The leader of the Universal Medicine cult claims to be an Ascended Master incarnate, the highest spiritual form of human being, the only one of his kind on earth, and the source of ‘One Unified Truth’. He claims competing sources of authoritative knowledge, such as academia and peer reviewed medical research are supernatural conspiracies to lead us away from his ‘truth’ and keep us in ‘illusion’.

He also told how his mother has ‘no love in her heart’ and is therefore better off dead. He was captured delivering teachings that disease and disability are karmic punishment for ignorance of his exclusive Esoteric ‘truth’. He told followers that science and evidence based medicine are a supernatural conspiracy to lead us away from his ‘energetic truth’, and controlled by his imaginary enemies, the ‘Four Lords of Form’.

Features a recording of Benhayon describing his toilet revelation. I’ve interspersed several excerpts from two Esoteric Medicine lectures with my own commentary, breaking down the way Benhayon uses his oratory technique and the teachings to persuade his followers to believe the outlandish, ridiculous and abhorrently anti-social teachings that has them deserting families and relationships, and dedicating their lives and their funds to his highly lucrative cult.

If you don’t want to sit through my commentary, move your mouse over the bottom of the video frame and click and drag the red spot to the parts you want to watch. 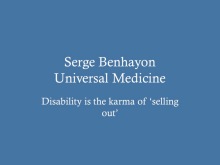 Audio of the full lectures is available at the following links:

Sorry about the editing on the above. I’ve just done a crash course. All of this material would have been online sooner if I’d had the time and the skills.

In this two part video series, Esther talks about the system of rewards and punishments that comprises Universal Medicine’s business model. In part one, she talks about profiting the deceptive bait and switch marketing, and how UM profits from generating fear and a therapy dependency. In part two, she talks about commitment and investment. Once financially embedded in UM, fear, peer pressure and the promise of spiritual and financial rewards and punishments make it difficult for doubters to leave.

Part One – profiting from fear

Feel free to give feedback. Do you like the videos? Are they helpful? Do you want more? Less?