Not honest, not reasonable, not making sense & not rolling over either

Universal Medicine cult members are instructed not to read my sites, lest they catch ‘contagious cancer’ or prana, or an entity jumps out and enters them or something. Instead they religiously read UM’s *Facts* site, which like all UM sites is sealed against outside criticism, commentary, corrections or reality. So when, UM’s best and brightest shrill ‘LIAR’ across social media platforms, their learned opinions are based on information filtered via the likes of Serge Benhayon’s most rabid propaganda Brides, Alison Grieg and Rebecca Asquith.

Less than a handful of the Brides of Serge have ever commented on my blogs, but Rebecca disgorged on my crowdfunding page knowing I was busy assisting my lawyer. I shut the comments and invited her to comment on my blogs, but she hasn’t taken me up on it. Instead her husband criticized me on one of the *Truth* blogs for shutting down comments on the page.

Rebecca is employed by Universal Medicine to administer their websites. She says she’s not paid to defame me. Apparently, defaming complainants and journalists, and trashing our livelihoods on the Facts site is purely recreational. Alison Greig and the rest of the *Facts* team probably donate their bilious ministrations in service to a multimillionaire as well. They’re not so enthusiastic about engaging with outsiders though.

A few months ago, Rebecca leapt out from the cover of the UM propaganda fortress to spray at me on Twitter.  A sample of her Esoteric charm:

Her comprehension of anatomy and what constitutes sexual exploitation and abuse is similarly Esoteric. 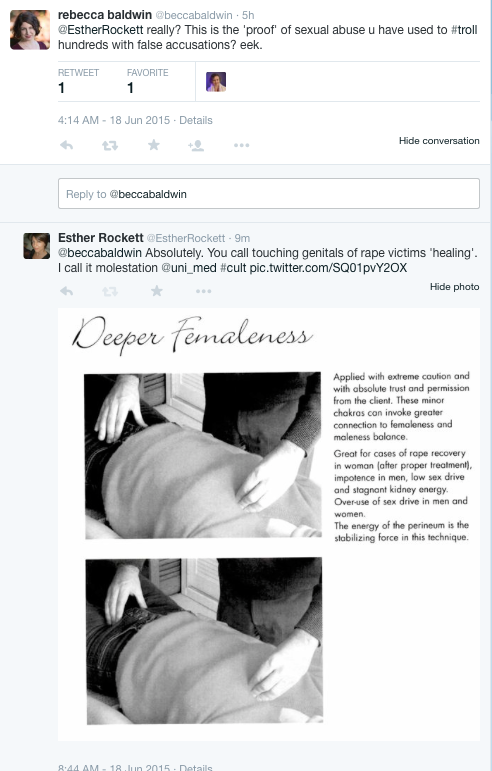 Confirmation from a physician.

She also beat a hasty retreat when I reminded her that she’d put her hand on a student’s penis at a Esoteric healing workshop without his consent. Poor bloke was disgusted and incensed and reported it to the HCCC.

Rob had this to say as well, to Alison, who attempted to disrupt him in publicizing my crowdfund appeal, and directed him to the *Facts* site.

Alison persisted in tagging people who didn’t want to be included in the discussion.

I posted a response to Rebecca’s crowdfund histrionics on the Truth blog, but, like all comments I’ve posted it hasn’t met with Esoteric approval.

Hi, I’ve been meaning to respond to Rebecca, but haven’t had a chance. I might respond to this blog, but the part I read didn’t make sense and I’m short on time, so I’ll leave it for now, thanks Simon.

Esther Rockett, When you say that you have proof of Serge Benhayon acting in a ‘highly dubious way’ are you referring to the time he put a hand on your clothed stomach during a hands-on healing session?

No. I was not convinced he had a good reason to touch my abdomen, but what made me more uncomfortable and concerned was his claim he was ‘reading’ my ovaries – my reproductive organs – fishing around for negative experiences I may have had with men beginning at five years old. It was the fact I did not give informed consent and I was pressured into it, in spite of telling him I didn’t need or want it and voicing strong misgivings.

Did you report this incident to the police?

Yes, I did. I made a very detailed statement and they took it to the DPP to see if we could get a prosecution. They also asked me to pass on contact details of anyone else who may have been molested, even if they were fearful of making a complaint.

Was that ‘incident’ the reason you decided to tell the entire Internet (over and over again) that you were concerned he was a sexual predator that could be grooming young girls?

No, not in isolation. There was his consistent trauma triggering at the workshop I attended, raving about rape and violence during the ‘healing’ sessions having told the mostly women present to ’empty your minds’. Then the women around him behaving strangely zombielike and submissive, bogus claims about Esoteric Breast Massage, and the fact his 15 year old daughter was participating at the workshop with all this sordid carry on. From the 2012 news reports I learned about Miranda, and my research revealed further examples of seriously transgressive behaviour – including inappropriate touching.

When the young people you said you were ‘concerned’ about went public and said that your sexual abuse assumptions were completely and utterly baseless, what did you do?
Did you:
A: Realise that perhaps it is not a good idea to publicise assumptions about sexual abuse when there are no actual victims to ‘advocate’ for
OR
B: Did you mock and scorn the people (including teens) who spoke up about your deplorable behaviour and (along with Lance Martin) insinuate that they did not have the mental capacity to be able to tell if they had been abused or not (?)

The young people who went public on your closed sites are a fraction of the children who’ve stayed in Benhayon’s home over the last 20 years. I can certainly accept they weren’t harmed, and I’ll be relieved if that’s true. However, given the deification of Benhayon and the intense peer pressure and bullying of your group we can’t be sure they weren’t coerced. And none of you can be sure that no child has come to harm. Not unless all of you were there with each of one of Benhayon’s houseguests. I’ve merely asked why parents would take the chance given very clear evidence of grooming behaviour I’ve exposed. I’m happy to mock hysterics and hypocrisy, but I did not mock Danna. Questions and criticism are not mockery, but we know your group characterizes questions as ‘abuse’.

There is ACTUAL abuse happening in the world right now, with ACTUAL victims that need support. You got this one very very wrong, but it appears you want to be youtube famous, so I don’t suppose you will find the grace to admit your wrongs any time soon.

Yes. Actual abuse. And in the lead up is grooming, and the Royal Commission is finding in thousands of cases people didn’t recognize grooming, or if they did, they didn’t act. Thousands. I start asking questions and get harassed and hit with legal action.

I’ve not been proven wrong. If anything the aggressive and hostile response to my concerns has only increased my suspicions.

YouTube famous? 3 years on, I’m moving on, Serge hits me with legal action, so I videoed a couple of talks. Pfft. How many YouTube vids have you made Rebecca? lol

You two represent everything that is wrong with the Internet right now. What a con.

Okay, a few brief points. Comments are open on my blogs and always have been. No one has been blocked. Rebecca has never once posted a comment. I’ve posted numerous corrections here and on other UM sites and they weren’t allowed. I kept screenshots, and blogged some of them.

I’ve answered every question posed to me and provided evidence. I’ve blocked no one on Twitter.

UM however, have blocked and censored anyone who questions, and worked underhandedly to shut down blogs, Twitter accounts and Facebook pages – without court orders. Responses to my questions on Twitter etc. veer between unreasoned obfuscation and hysterical insults.

UM have also erased websites when put under scrutiny – including the Esoteric Breast Massage site and it’s bogus gynaecological claims, and the Fiery Building Fund site, and its claims it was funding the Universal Medicine (commercial) Centre for Unimed (commercial) events.

[A fun Esoteric before & after transformation is the Fiery Building fund page before charity commission investigations and after. The fund switched from funding construction of the UM commercial centre, to a ‘charity’ college building and pulled down photos of Serge leading fundraising tours.]

Simon also works for the firm, doing odd bits of media production and ever more frequent puffs of propaganda in service to the one. I dunno, Simon lost me in the first few paragraphs of expressing his Truth, but I caught this bit at the end of the blog.

I’ve committed the Esoteric crime of using a pseudonym to keep my professional life separate from my activism. He’s not sure how many false names I’ve used. He stopped counting when he ran out functioning synapses. Or maybe he was busy contributing cult propaganda and exploitation to society – helping Serge hone in on cancer patients and sexual abuse survivors.

Simon believes supernatural child raping entities exist, but none of  our readers, supporters or donors to my legal fund. The Four Lords of Form on Horseback exist, but no other detractors and no victims. He ‘knows’ because Serge sold him ‘clairsentience’ – a euphemism for believing your own bullshit. Lance and I have nothing better to do, apparently, than dick around on the internet terrorizing the Esoteric community and their penchants for clearing male energy from unsuspecting breasts, and rape energy from hypothetical pubic chakras.

Simon believes I ‘badmouth’ people I know nothing about – apart from their compulsive online exhibitionism, and the fact a heap of them are cult recruiting in workplaces – sometimes tax payer funded workplaces, rorting Medicare and private health funds, infiltrating community groups and schools, flogging worthless occult quackery to vulnerable clients, failing to disclose their commercial religious backing and bragging about sending their daughters to stay with a career con artist and personal boundary transgressor.

Simon has advice for me. I don’t remember asking for it, but anyway, he and his UM investor besties would totally donate to my legal fund to see justice – instead of Serge using the dosh Simon and his fellow targets have ‘invested’ in their ‘initiations’ to buy censorship and intimidation, but he can’t stomach it. Poor love. Must be those daily rations of prana free pea soup.