She’s not heard of the Streisand Effect. She also thinks Fluoride in the water supply makes people less intelligent. So what’s her excuse?

I’ve done a fair bit less blogging lately and I only infrequently reply to her defamatory Twitter spam. But when dentists throw their weight around, wasting police time trying to have people arrested for disagreeing with their public promotions of a commercial healing religion scam, they deserve their own special post.

Mystic dentist, Dr Rachel Hall, is one of the Universal Medicine cult’s most prolific propaganda champions and one of Serge Benhayon’s most vocal defenders. She fancies herself as an amateur marriage counsellor, making comments to news outlets on other people’s marriages. She’s also a registered dentist who plugs anti water fluoridation pseudoscience, and has advertised her propensity for hallucinations.

I can recall telling my teacher “When you were in your life before this one, you had a baby but it died and you were very sad”. She was pretty shocked, and asked my parents to come in to have a chat.
I remember many occasions when I spoke of the “people” who would visit my room at night, or the “angels” who came and sang with me, only to be told (or overhear the adults say) that I had a very over-active imagination, or worse, that I was telling lies. Truth About Serge Benhayon site

@EvolveHolistic Here’s a novel approach for you – evidence based science on water fluoridation. Might open your mind. http://t.co/xhFFgYjB0X

Here she is in EDG student notes presenting her ageless science free wisdom on Esoteric dentistry:

Of all of Serge’s overheated wowser Brides – and she’s competing here with Ariana Ray, Desperate Desiree Delaloye, and Paula not on the payroll Fletcher – hers is the most intense obsession with me. Ever since I sent her and a couple of the doctors an email politely asking them to stop using their influence as health professionals to promote a predator, she’s been craving more of my attention. My email to her and reply to her response was taken to Queensland police as a complaint of stalking. Following that she’s continued to make complaints to WordPress, Facebook and Twitter to have my accounts shut down and she was out front in trying to get me deregistered from AHPRA. She was one of the 150 cult members who went whining to the ACCC because I’d named them as cult promoters.

She’s posted frequently on Facebook about me and for the past year she’s interspersed her spam tweets of UniMed Living promos with dozens of links to the fruity UM *Facts* site and the site Desiree and other cult profiteers set up to defame me, trash my business and try and drive me out of Byron Bay. They made news in March for their bullying of me and other complainants, critics and journalists. 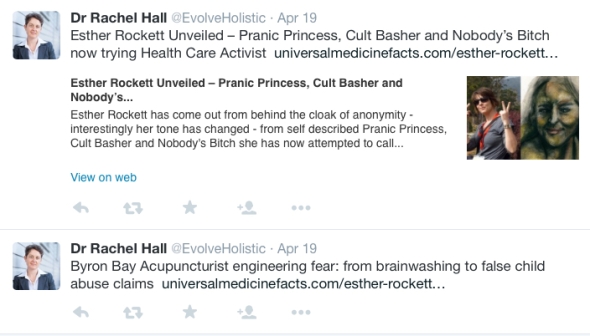 @EvolveHolistic Pro-choice on vaccination is an anti-vax stance. Why are you tweeting unqualified Benhayon as authority on medical matters?

@EvolveHolistic Working on the facts alright LOL! http://t.co/77BsmjHJhG Barrister defames us rather than take legal action. Only in #cults

Anyway, last Monday, at 4:30 am, she got so worked up she ditched her gentle breath meditation to call the police to make a complaint. I’ll have to take Lance Martin’s word for it on that. They never spoke with me. According to Lance, Dr Hall wanted me charged with using a carriage service to harass her. I’m not sure if she told them it was for replying to her defamatory tweets. She told the cops I was trying to ruin her business. She gnashed her unfluoridated teeth and stamped her little feet.

So Lance told them she’s a UMer and that’s where it ended. I’m surprised that nonsense made it as far as Lance. I called Bangalow station to let them know I was in my clinic if they wanted to drop around for a chat, but nah, they had work to do – you know – apprehending actual criminals.

I dunno. If Rachel Hall is going to use her professional Twitter account to spam tweet anti-fluoride pseudoscience, Sergio’s occult quackery and a lot of ad hominem slurs against me, Lance, Ira and Jane, that no one – apart from a few dimwitted cult members – ever retweets, she shouldn’t be bitching that I’m the one ruining her business. This is the second time she’s tried to harass me via the police.  None of the other complaints she made about me went anywhere. Trying to get me banned from Twitter and WordPress didn’t work either.

So she took it to the police.

She’s attracted a bit of attention too for deleting comments on Facebook from anyone who quite civilly disagrees with or challenges her nonsense on fluoridation. Typical of UMers she calls disagreement abuse. In my case she calls it a hate crime. What she and her fellow investors don’t get is that if you persistently post bullshit on the internet – misleading, misguided and misanthropic bullshit at that – other internet users will take you to task. If you’re going to make statements publicly, whether it be in the company of a few people or on the net for all to see, you need to be prepared to back it.

“Chakra-puncture is a healing modality based on the Science of our living energetic cells.” http://t.co/byhw8ybWyH

@SkepticalDDS @EvolveHolistic wow. That looks so enlightening! Maybe I could gain 67th level mastery through that.

But don’t count on the Mystic Dentist getting any cleverer anytime soon.

The backfire effect occurs when, in the face of contradictory evidence, established beliefs do not change but actually get stronger. The effect has been demonstrated experimentally in psychological tests, where subjects are given data that either reinforces or goes against their existing biases – and in most cases people can be shown to increase their confidence in their prior position regardless of the evidence they were faced with. In a pessimistic sense, this makes most refutations useless. Rational Wiki 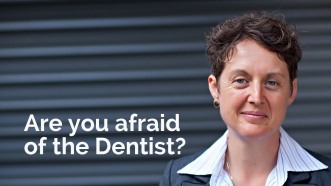