It’d be a worthy project in the right hands, Stephen

All Rise – Say No To Cyber Abuse is a PRI/LBG/NSC (Private, Limited by guarantee, no share capital, use of ‘Limited’ exemption) company registered on 10 September 2014. Simone Benhayon is company director. She is step daughter of UM head and religious leader, Serge Benhayon, and Universal Medicine UK company director. She also doubles as the reincarnation of Winston Churchill. Its other director is Sara Williams, former company director of UM UK, and current company director of Esoteric Womens Health Pty Ltd. Both women are trustees of the bent Sound Foundation Charitable Trust – the tax exempt building fund for Universal Medicine’s UK commercial premises. The charity was hit with regulatory action last year, which saw Simone Benhayon hurriedly write off financial discrepancies as a donation of £80,000 worth of swimming.

The Maida Vale address listed for the company is that of William’s London Esoteric healing clinic, Spherical Living.

Currently, All Rise Say No is little more than a Twitter account, and their followers are 90% cult apologists and financial associates. All Rise’s first project was an online survey purportedly researching cyber-abuse. It would be a worthy project in unbiased, peer reviewed hands, but the cult will certainly use or botch the results to lobby the UK government to classify anti-cult, anti-sexual abuse, anti-healthcare-exploitation activists, and people who use naughty words as ‘criminals’ and have us thrown in an Esoteric gulag. Or they’ll lobby for increased online censorship of bloggers like myself who risk our livelihoods and personal safety to expose predatory commercial religions. 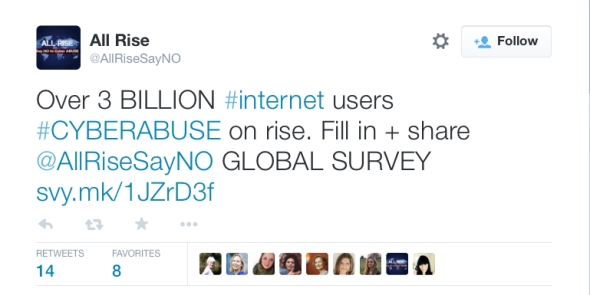 3 BILLION potential abusers on the internet!

However, the UK government is unlikely to respond to campaigns of dishonesty by aggressive religious zealots. Liberal democratic societies protect free speech in order to limit the growth of corruption, even if it hurts cult members’ feelings or UM’s bottom line. Futhermore, the only people who truly believe a working class blogger is capable of bullying a religious conglomerate, hundreds of its investors and their legal team, are the people contributing to literally thousands of vilifying comments about me on their closed *facts* and defamation site. The one that doesn’t allow corrections, questions or critical comments.

UM and its lawyers have a record for underhanded censorship attempts via false legal complaints to Google blogger and then WordPress, attempting to have my blogs shut down. When that wasn’t successful, they hired organized crime figure, Michael Featherstone, of Phoenix Global and Internet Reputation Australia to make false defamation and DMCA compliants to have my Facebook pages shut down, and links to news reports and blogs removed from Google Search Australia. Contacts in Europe have reported UM are rorting Europe’s ‘right to be forgotten’ law to have all traces of Benhayon’s suspicious conduct removed from Google searches there.

In the meantime, Benhayon obstinately (and spherically) refuses to answer questions from the news media. 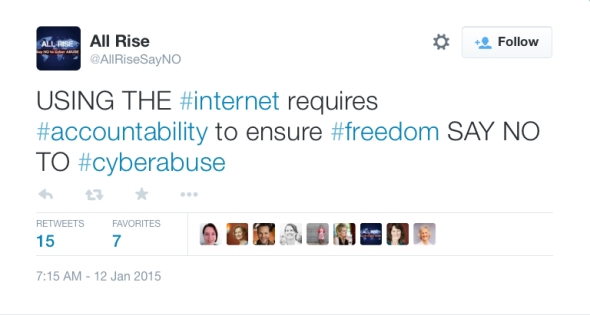 It’s all about free speech

And Esoteric ‘accountability’ not only means Serge never answers any questions, the cult would like to prohibit me from viewing defamatory tweets – about me – from UM’s lawyer, Paula Fletcher, or Serge’s business partner, Desiree Delaloye. Let alone any form of redress.

Readers who are new to the phenomenon that is Universal Medicine may be surprised by the hypocrisy of an anti-cyber abuse campaign run by the same people stirring religious followers into relentless online bullying of whistleblowers. However, these people ran a cyber-bullying conference flop where eight of ten high profile speakers cancelled when they found out it was run by a cult. The same people characterised a complaint to the UK Charity Commission that resulted in regulatory action against UM’s UK Charity, The Sound Foundation, as a ‘trolling’ campaign. The same people marketed the Girl to Woman commercial grooming Festival as a ‘child welfare’ initiative and failed to disclose it would be marketing UM and its religion. The same crew promote Benhayon teaching inappropriate touching of sexual abuse victims as ‘healing’, and exploit his underaged female houseguests to publicly vouch that he’s not a paedophile.

No such information is made available to the high profile people they’re attempting to recruit to promote their nasty enterprise.

It’ll be interesting to see whether All Rise and its army of spherical tweeters will be deluded enough to direct their targets to the prime examples of online mobbing and harassment they’re perpetrating against us, and how they’ll fare in persuading media savvy people well able to think for themselves. 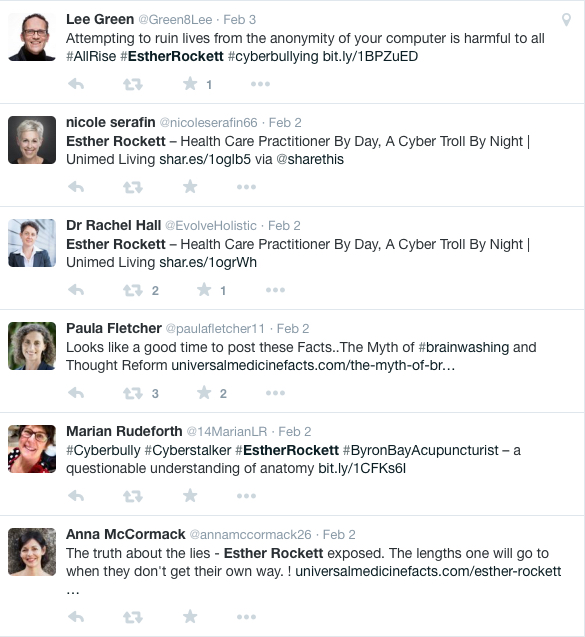 A small sample of cult tweets

The next move from All Rise Say NO, is to have their main ring leaders, quasi-celeb Dragana Brown (also a Sound Foundation trustee), and Otto Bathurst, run anti-cyber-abuse programs for youth and other recruitment pitches pretending at social welfare. In the meantime they’ll tweet their feigned cyber-abuse outrage and spam unsuspecting celebrities for free promos.

Any old premise to get a retweet, yes Dragana?

But not if members of the public warn their targets first.