Successful businessman, entrepreneur, elite tennis coach, philosopher, philanthropist, healer, author, the World’s Teacher, the Fifth Level Initiate, the One, Leonardo da Vinci & Alice Bailey reincarnate, one of the Hierarchy walking among us, the voice from heaven for our times…

In truth, Serge Benhayon is man of mediocre abilities. His tennis coaching was ordinary. He styled himself as an elite coach but none of his pupils made elite rankings. He was known more for his verbal forcefulness than results and when it came to the crunch his ego wouldn’t allow him to release talented charges to more able coaches. In business he was all ambition. Typically overblown plans for expansion ended in bankruptcy. At some point Sergio the mediocrity rebranded as Serge the guru abandoning his sporting con to exploit the New Age spirituality and healing con – where a lack of scruples can be framed as self mastery and victims are dumb suckers with bad karma.

Ponder on This by Alice A. Bailey

Benhayon the philosopher is another pretence. With no intellectual prowess, educational attainments or original thoughts, he built his empire on wholesale plagiarism of Louise Hay and Alice A. Bailey, down to reproducing Bailey’s titles and cover art.

Most punters quickly see it’s a scam and move on, but several hundred are stuck in the illusion, suspending common sense for ‘community’. Benhayon sells them his pretence – a fairy tale rise from bogan beginnings to messiah-hood. His followers buy a confected commercial transcendence, but the illusion requires regular maintenance – hence the clone-like unanimity, the insularity, the weird daily rituals and the regular dress ups.

The pretence bolstered by mutual congratulatory overkill on the protected love blogs.

Recent public scrutiny has merely amplified the pretence. Universal Medicine’s new propaganda has excised Serge’s spherical mumbo jumbo, proven to be bad for business, and replaced it with glossy photos of the faith-full joy-fully assenting to Serge’s One Unified Truth. The cult health professionals contribute to the deception with statements of religious belief framed as medical endorsements, embellished with fictions about current rates of disease and misery. As our friend, the Lord of Form wrote, this is the fantasy they are living in- that in ancient times people were better off, more intuitive, more in connection with god. They are worshiping an idealised past that never existed over a now that has given them the best life of any human generation.

They’re paying Serge to rob them of a perfectly good reality.

Universal Medicine’s substandard hands on body work is marketed as ‘sacred’. Adherence to the Way of the Livingness is sold with the promise of freedom from disease and a better reincarnation. Esoteric healing supposedly endows the suburban Sons of God with ‘clair-sentience’ – thinking they ‘know’ when they are deluded, clueless and scammed. Donating to Serge’s building fund benefits the Kidneys and future incarnations. The laxative diet helps customers ‘connect’ with ‘the light of the soul’. Consistent investment makes the ‘Brotherhood’ of ‘Sons of God’ more in touch with their ‘femaleness’. Molestation is ‘healing’.

The chosen Brides are rewarded with posts among the hierarchy as a Real Media Real Change team member, or a College of Universal Medicine ‘educator’, or with a boost to their small business via an endorsement from the top.

They apply their make-up with a trowel, pose for cult photographer Clayton Lloyd and provide testimonials as celebrity non achievers selling absurdities.

The masks and costumery symbolize not only their denial of their ordinariness, but denial of the abuse and fear at the heart of cult oppression. They compulsively groom and prettify to try to conceal the ugliness at the heart of the scam – their hurtful behaviour, their bitching, bullying and passive aggression. They paint themselves as innocents and try to charm the unwary into their toxic game of make-believe and its fall out of trauma, fear, heartbreak and confusion.

The dress ups, the selfies, the compulsive Facebook competitiveness, the peer group pressures and rewards for affirming the group think, the backstabbing of anyone who questions or who doesn’t fit – it’s all part of Serge’s lucrative infantilizing program, and a nasty pastiche of authentic personal development. 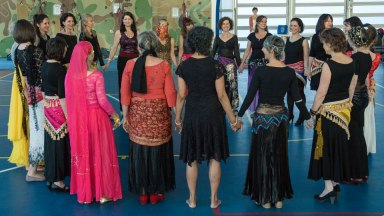 Grown ups don’t need constant validation from a group. Grown ups can take criticism and address questions about their behaviour without histrionics and tantrums. They don’t shut out questions or expressions of concern. They don’t seek to bully or censor anyone who doesn’t agree.

It’s a lot of energy expended maintaining a regressive illusion. It’s a lot of money to pay for false feelings of enlightenment and superiority.

It’s an expensive mask of ‘soulfull-ness’ and joy that convinces no one, except perhaps themselves.