alison greig: HI ALL – THIS LETTER AND ATTACHMENT ARE FOR MEMBERS OF THIS SITE ONLY – NOT TO BE SHARED OR FORWARDED – AGAIN PLEASE REPLY BELOW TO THIS THREAD – OR FIND THE RIGHT ONE FOR YOUR POST eg UK INITIATIVE 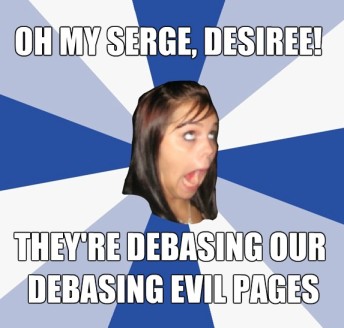 Okay, I know Venus already covered this material over on the Accountability blog, but I can’t resist my own dig. Besides, Venus keeps telling everyone I’m not pulling my weight and I want to assure readers that is a scurrilous and defamatory lie, and besides I only signed up for morale boosting duties and catering, under an agreement that Venus wears the flak from the Esoteric lynch mob.

None of which should matter, because I don’t exist.

In the Christmas Harassment post – which elucidated the Brides of Serge’s festive pseudo-legal demands, Venus had a fascinating discussion in the comments about Rebecca Baldwin’s infatuation with her, and how imitation is the highest form of flattery. We suspected Rebecca Baldwin is fashioning a Venus skin suit out of envy and lust – a kind of aspirational homoerotic passion for the forbidden etc. Our friend, Sub Rosa said:

I am sure some of these women do need your skin suit badly , Venus. Lol…
I’ll give it three more months before Rebecca opens her own hateblog.

Who knew it was already underway, and a whole cult load of Sons of God had joined the collective obsession and were finding their true passionate expression on the hidden Esoteric love site…

What I can say is the infatuation is unrequited and Rebecca is on THIN ICE. Lord knows, we’ve all called Venus a thing or two, so ‘hate-blogger, criminal and troll’ is water off a duck’s back, but labelling her a heavy metal fan is another thing. An extreme heavy metal fan at that! It’s an inaccuracy, a falsehood, and Venus is consulting her legal counsel over the semi-public insult to her aesthetics! Rebecca is saying she took her name from some thrash artists, Cradle of Filth, which sounds more like an Esoteric Healing Workshop, but no, that band stole their name from Venus’ porn name.

Her career was short, albeit.

We recently asked you all to write a VERY SHORT PARAGRAPH about who you are and what you bring in the world in order to create a new document that presents who we are in complete contrast to the Naming Names page.

That hardly seems necessary given all of the students are all over the internet spruiking who they are, alongside their unconditional devotion to UM.

They’re realizing attaching their names and professional reputations to a scam isn’t a great career move?

We are creating a very important document that will break the hold of the Naming Names page. It will be an extremely powerful document of the living truth that cannot be dismissed on any level.

What hold? That we’re giving readers a more accurate picture of what to expect when they pay money to UM associated service providers?

The ACCC would have told you what that’s all about. It comes with a matching law, called the Trade Practices Act.

We are also creating a debasing evil website which will debase all the blogs one by one – as a powerful start we want to lead with the naming names – this needs your collaboration immediately.

So is that the password protected one, or are you lot going to come out of the closet and post your loving debasements publicly? So that everyone gets to read?

Who on earth came up with title ‘debasing evil’ by the way? For pity’s sake didn’t any of you ask William Foley, the cult’s linguistics professor, for some help with SEMANTICS? You can’t debase evil. Evil debases. By its very nature, EVIL DEBASES! You don’t debase it back. You can counter evil, or annihilate evil, or discard evil, or any number of everyday self-loving word choices, but DEBASE??

Or did Serge come up with that?

That would make sense.

A little preview for our readers: there’s nothing new on the debasing evil site, except the Sons of God are more forthright with their emotions, and the thing is riddled with rage, paranoia, jealousy and comparison – and lust. The cult uses the same format to respond to our posts as we do to theirs, but without allowing us to see it. And without our open, coliseum style comments. As expected the responses don’t answer our questions, and don’t invite any reasoned discussion with us.

It goes like this; Rebecca et al quote something Venus has written and then write a few thousand words on why it is all lie lie lies and organized criminality and whatnot.

THIS IS ABSURD! E***** M**** R****** has never been to an Esoteric workshop, except once, and maybe that weird yoga channelling thing, and doesn’t know any Esoteric families, much, and she can’t know what ‘THE’ means Esoterically because she is loveless, childless, Sergeless and in pain and hasn’t dealt with her issues…

And on and on for thousands and thousands of words repeating the same ad hominem mantra, egged on by the unisex Brides of Serge and, um, Serge.

Look, Rebecca, we’re available anytime for coaching if you decide to spruce up your literary skills. There’s not a lot of flair in your writing, Precious, and when you write, you all sound THE SAME. I’d look at introducing some structure, some lyricism, some wit, some METAPHOR. 😮  You know, a bit of Atwood meets Voltaire, or Wilde, darling, get some Wilde into you.

I suppose we can’t expect much from people who’ve never read Orwell.

And let’s face it, Venus is no slouch when it comes to word count, but Rebecca’s missives have reached a par with Eunice Minford’s. They make Venus’ longest posts  look like haiku.

What we need here is a VERY CONDENSED statement of your experience, your qualifications, what you now do – like a summary CV – Please look at how simple this is from these examples (it should take you a few minutes):

You missed the bit about Esoteric Breast Massage, Jenny, or is EBM passé since it was given an Accountability dissection?

Esoteric dentistry? What’s that? Your root canal comes with a plug for however many lifetimes’ supply of Esoteric healing workshops, and some advice to sit on a symbol – $7.50 a piece or $210 for the wholesale set.

The anti-fluoridation propaganda is gratis.

The process of stating these facts clearly and without hesitation confirms that everything about the Blogs that list your name cannot and does not bear any semblance of truth. As Deborah Benhayon has written:

“we cut through imposed evil –
for a lie cannot stand up against a lived truth.”

We were wondering if she even exists…I mean we thought Miranda was less photographed than the Loch Ness monster, but Debby Benhayon is more invisible than the Four Lords of Form. So did she write that all by herself? Did anyone see her holding the pen?? Was she counting the money at the time?

It is time to stop evil having the upper hand.

Alison, Deborah B, Desiree and the UM Facts Team

FACTS! Official Esoteric ‘facts’. Why don’t you come here and give us your ‘facts’, Facts Team.

Talk about debasing the language.

And we were tickled by Alison Greig’s gentle breath browbeating of students’ regard for their names and reputations. It’s all right for her. She’s not on the Naming Names page, but I’m sure we can find some space…

…On the level of service, do you want to address the balance of light here on earth?

It is up to you – so please get your bios in – we had a deadline of Friday last week – it was not met by most – so what has happened to you all ? – PLEASE POST ON YAMMER – Debasing Evil Naming Names in a word document.

WHAT RULES – THE DIVINITY THAT YOU ARE OR COMFORT ? – Perhaps listen to Sermon 9 – The Sermon of Truth and Energetic Truth – that was presented on Saturday it might inspire.

Cripes. I thought I had a somewhat excessive affection for CAPS LOCK – which I fully defend in the name of satirical hyperbole, BUT if you’re flogging love-ly-ness and gentle-ness and being beauty-full, you’d think you’d know when to lay off the thing.

And will someone answer our questions? Serge told the Charity Commission UM is a religion, not a business. He told the Echo it’s not a religion, it’s a business, and there’s no group and no followers – in contradiction to his followers’ stated association, beliefs and ideals. Now his EDG Messages have been rebranded as Ageless Wisdom® Sermons.

So IS IT A RELIGION OR NOT?

He’s an odd little munchkin, the UM puppet master. For months now we’ve been asking where he is. Now we know. He’s up to his usual tricks, and still hiding behind his bullying Brides, with password protection.

Does that mean you’re still the World’s Teacher, Sergio?

Or did you mean the underworld teacher all along?

24 Comments on “FUN with debasing evil”