In October 2013, Universal Medicine’s UK charity, the Sound Foundation, in Frome, Somerset was issued an action plan by the UK Charity Commission over issues of public benefit and trustee conflicts of interest. In other words, the cult was busted running a tax exempt sham and given a deadline to start acting like a legitimate charity – by spending money in ways that benefit the public rather than the Benhayon family of bullshitters and an assortment of hangers on. Given that the charity’s income in the year ending September 2012 was £1.2M and the charitable spending that year amounted to a piddling £74K, we were hoping for big things before the deadline of May 1. But nuh. The maternity unit at Frome Community Hospital were given a few chairs…For the staff. And we know why the cult likes to butter up medical staff.

So far the Sound Foundation’s charitable activity has consisted of the Self Care Week event held in conjunction with the NHS Self Care Forum, which caught the attention of UK current affairs paper, Private Eye, and in early January the Sound Foundation EXCEEDED THEMSELVES with a donation to the local maternity unit. 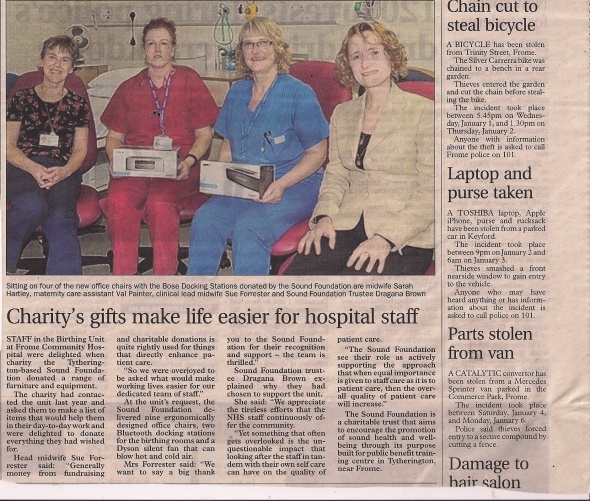 Thanks to our UK bunker commando, Rippled Donut for spotting this in the Frome Standard, January 9, 2014.

The NHS must really be ON ITS KNEES if it can’t afford anything for staff to sit on.

Was use of the docking stations conditional on the poor bloody midwives having to play Chris James as backing muzak to the blood curdling screams of birthing mothers? Like students at the Australian College of Massage have to endure his ‘ambient’ dross through their classes since the owners got struck by the cult?

The final gift is reminiscent of UM itself, an expensive apparatus that blows hot air.

Did the soul-full, anti free speech drone, Dragana Brown, give those women a Serging of how loving children emotionally has never worked, or that boys need the pack energy smacked out of them or that women pass on carcinogenic emotional energy to babies through breast milk, or any more of Benhayon’s noxious, inhumane doctrines on parenting?

And we know why the cult is buttering up hospital staff – for the same reason they’re infiltrating the NHS and holding CON-ferences like Self Care in Health Care – to recruit healthcare professionals. No matter how brainless they ‘truly are’, the cult’s health professionals give Serge’s dodgy therapies, dodgy college and dodgy courses a veneer of credibility. Health professionals also have access to large numbers of patients to whom they can market Universal Medicine’s money for nothing products and services.

The cult’s first generation of self-loving health professionals have been a glorious asset in his recruitment drive – to the point where they’re falling over themselves to teach at his tax exempt college – for free. Soul-fullness is all about competition and recognition after all. We see them pimping patients to the cult on the Medicine & Serge Benhayon propaganda site, and flogging Esoteric Breast Massage, Esoteric Chakra-Puncture and other abuses to trusting patients and the public. The regulator hasn’t been concerned so far that they’re in breach of their professional codes of conduct by exploiting patients’ lack of medical knowledge, unrealistically raising expectations of treatment outcomes and promoting untested modalities that have zero clinical basis.

Let’s not forget that Serge is happy to use those same professionals to weasel money out of the Federal Government:

THE federal government has refused to release documents explaining the link, if any, between a $709,493 Commonwealth grant to the YWCA and six public lectures it hired controversial alternative therapy group Universal Medicine (UM) to conduct…

In an email, UM founder Serge Benhayon said: “If you have questions regarding the funding of the YWCA and how it was spent you will need to refer those questions to the organisation who the funding concerns (YWCA). They chose to spend their money as they did. We provided the services.”

http://www.medicalobserver.com.au/news/government-blocks-ywca-documents or for readers without access use this link.

The health professionals involved with the College of Universal Medicine and the Sound Foundation are also ardently supporting and working for tax exempt ‘charities’ set up to construct and renovate commercial premises for Serge & Co. And as we’ve recently seen, Jane Keep managed to embroil the UK NHS in scandal by persuading the NHS Self Care Forum to promote what is frankly a charity front for UM’s commercial activities. The same professionals are also involved in attempts to harass, intimidate and slur those who speak out against UM.

Bang for the charity buck

Don’t get me wrong, we think the nursing and midwifery staff at Frome Community Hospital, and pretty much everywhere else on earth deserve comfortable and pleasant working conditions, and perhaps the odd foot massage. What they don’t need is the manipulations of a toxic cult attempting to recruit them to a pyramid scheme of abuse.

And if we’d known the Sound Foundation was shopping around for ways to look charitable, while trying to hook a few more health professionals, we’d have told the Frome Hospital to ask them for a LOT more. A jacuzzi perhaps. A chaise longue and a cappuccino machine, and heck, maybe a humidicrib or two or some neo natal intensive care equipment for, you know, SICK BABIES.

Because with donors like Sound Foundation trustee Michael Nicholson donating one million pounds, lord knows, the cult has the dosh.

Oops! I was just about to post, when our favourite gluten packed Donut sent this flyer in from the UK – the cult’s Women in Livingness free community CELEBRATION to be held March 8 at the Sound Foundation, Frome. And my, what a different affair it is to last year. (Click images to enlarge) 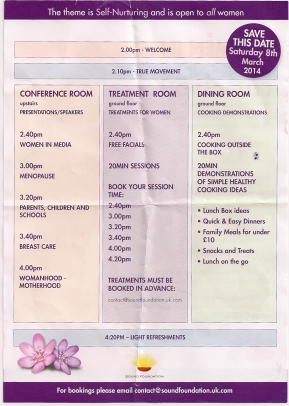 Unlike last year, the Eso-nuns haven’t dared register the thing as an International Womens Day event. The same event in Australia was deregistered by the IWD organization when they were alerted to Esoteric Women’s Health’s abusive practices – including sexism, grubby Esoteric Breast Massages and other inappropriate touching; routine privacy invasions and indoctrinations. We’ll be watching the IWD site and making sure they don’t try it this year either.

But they’re leaving their PR campaign a bit late. In spite of UM being ALL OVER the internet, including a Wimmin in Lyingness dedicated blog site, and the Sound Foundation having a website ‘coming soon’ for lord knows how long, that flimsy bit of paper pasted above is the only extant evidence of the thing. Why haven’t they talked it up on the internet? Why aren’t they spruiking the utmost integrity of Esoteric Breast Massage or their connection with the NHS. Why haven’t they named the speakers? We can imagine Dragana will be doing the cooking – pea and basil gruel anyone? Or perhaps she’s going to talk about her D grade ROLE in the media. Breast massager, Sara Williams and Jane Keep will be handling the breast care, literally, and perhaps Eunice Minford could rabbit on about emotionless love and menopause, and pseudoscience, and her self-love affair, or something, at length – while a bunch of local women get a ‘free’ facial going over in the treatment room. But the cult’s massagers and money grabbers will save the all men are bastards and give you cancer spiel for when the punters start paying.

Anyway, why no publicity beyond Frome? What has the Sound Foundation got to hide?

Apart from the money?