Boys have accidents to shake the energy out of them. If your son comes home and you feel he has been affected by male “pack” energy,  you need to shake the energy out of him either by cutting it verbally  or physically shaking him. It is occasionally best to smack it out of him, so that he avoids an accident. Serge Benhayon, quoted in student notes, Esoteric Development Group, 8, May 17, 2008

Those arbiters of Esoteric transparency, Real Media Real Change are at it again, exploiting a respectable event to lure new donors to cult leader, Serge Benhayon’s temple of death, sexism, molestation, narcissism and real estate enhancement. But this time they’re targeting blokes, and they don’t just want their money, they want their balls as well.

The events, ‘Starting the Conversation – A Men’s Health Conference’ are to be held in conjunction with International Men’s Day in Brisbane and Lennox Head on the 16th and 17th November, 2013.

The cult, via anti free-speech front group, Real Media Real Change, thinks they can imitate the grubby marketing they use to target women – deceptively peddling sexist indoctrination and inappropriate touching as therapy. Just as they tried to cash in on International Women’s Day only to be deregistered by the IWD organization, this time they’re trying a men’s health conference to coincide with International Mens Day. However, nowhere in the publicity does Real Media Real Change mention Universal Medicine’s abhorrent anti-male doctrines, or their record for casting men as abusers and bullies, issuing vexatious AVOs and breaking up families so that property settlements can be donated to the cult.

For a refresher course on how the Universal Medicine cult demonizes ‘maleness’ and seeks to neuter so called male qualities of strength, assertiveness, libido, reason and intellect from both male and female followers, take a look at Venus’ posts, Esoteric Feminism and the series on Esoteric Manhood, beginning with Woman Good, Man Evil. 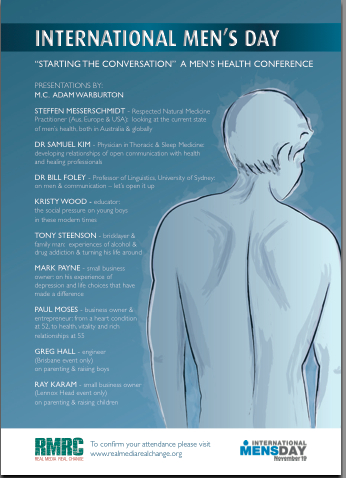 As for the Psychological Well-being Conference 2013, to be held at Bond University on the Gold Coast, the line up of speakers is a lacklustre bunch of cult yes-artists masquerading as know-it-alls on ‘maleness’. In this case, they’re Serge’s harem of she-males, apart from Kristy Wood, who makes a crust flogging watered down Benhayonism in primary schools.

The stars on the bill are chest specialist, Dr Samuel Kim, whose other specialty is blessing patients and assisting them to die – no shit, Serge SAYS SO – and Professor William Auguste (Bill) Foley from the University of Sydney, who is the first linguistics professor in history to be thoroughly conned by Sergio the bullshitter’s spherical syntax.

The rest of the speakers aren’t worth the bother of lampooning except to say they’ll be contributing to a day long program of conscious cock shrinkage, telling all present that men aren’t in touch with their femaleness, which on Planet Serge translates as not brainwashed, stupid and docile enough to give their money to the cult. No doubt there’ll be a special segment flogging Natalie Benhayon’s Our Cycles menstrual cycle app to blokes, and telling them how much better off they are when they start sharing their deluded experience of man-struation, a la Lee Green.

We can’t understand why Paula Fletcher from Universal Law solicitors Mullumbimby isn’t on the bill. She could give a special talk on how to take out an AVO on non cult spouses when they ask where the money’s gone.

The male Brides of Serge are deferred to in the cult as ‘real men’, and the Men’s Health Conference is an attempt to recruit more of the same – men eager to apologize for their masculinity, while stunting their critical faculties to accept Serge’s line that bastardry and aggression are male gender traits. Just look at Paula Fletcher, Sarah Davis, Desiree Delaloye, Eunice Minford and Rebecca Baldwin for the case in point. Universal Medicine doesn’t want or need men willing to exercise reason and assert themselves enough to question the scam. Women, Serge Benhayon says, should be lovely and gentle. They should distrust the mind and only trust ‘feeling’ (as long as that feeling doesn’t include emotion), not be racy or driven or participate in sport, and not have ideals or beliefs. He also tells women their non cult partners and loved ones are ‘loveless’, ‘in pain’ and ‘holding them back from their light’. He asks them to book for a perpetuity of Esoteric healing sessions and workshops to clear the energy of sexual objectification and rape left from this or previous lives, and hassles them constantly to donate to his ‘College’. The same love-lys will hurl around bogus legal threats at anyone addressing the facts, but they never question the guru.

He likes his ‘real men’ just the same.

My sincerest apologies for adding to the pain, but we had to throw in this passage from one of Serge Benhayon’s self published tomes, beginning with this howling nonsense on the occult-interplanetary-metaphysical-fantasy gender war.

It was the female etheric form that turned physical first and hence, why they first ruled on Earth in the Dynastic Period. Because the Venusians held the balance in the Femaleness and the Martians held the balance in the Maleness, it is interpreted as Eve tempting Adam. In other words the female went first. Truth is, both sets of lords made an equal deal. They then proceeded to make male spiritual bodies. This meant that they could organise a group-orientated impulse between them and thus, created the first knowledge of the power of group work, albeit not in the livingness of our fiery God, but to create an existence according to their own pranic impulse.

Benhayon’s ageless wisdom extends to men’s and women’s health, where he attributes disorders of the reproductive organs to confusion over gender roles.

THE EVIDENCE OF THE IMBALANCE

There are of course many signs all over the world of the way in which man is conducting his out of balance deeds. We do not here need to cover these out of balance expressions, which cause much agony and misery to many. The focus here is to bring the reader to the way in which we are all affected by the imbalance on our planet and what it is doing to our vehicle of expression, i.e., to our physical bodies.

For the purpose of bringing the reader to an astute level of focus one can look and examine the growth in certain conditions now affecting the well-being of both men and women, conditions which of course have been around for a long time for the same reason, but now are completely dis-proportionately, very much on the rise. Noted here is the rise of, for the Carnal Woman, breast cancer, ovarian cancer, endometriosis (now happening more in very young women and teenage girls), fibroids and cysts in the womb area, problems with menstrual pain and menopause. For the Carnal Man, impotence in men (at very young ages), younger cases of prostate problems and its cancerous expression, testicular conditions and complications, etc. The list and its derivatives go on and on. The contributing factor that has given rise to these diseases and ill conditions is the confused social behaviour and its expectancy:

-Do men open car doors for women or is this condescending?

-Do men pay for the dinner or is this insinuating that they can because they earn more? Does a woman become offended because she cannot be allowed to pay her own way? Does she now pay for dinner because she may earn more than he? And if so, how does the man feel about this in her presence? Is there a power play in paying for dinner? Is it a sign of independence and a show of strength and freedom, or is it simply an old fashioned loving gesture?

-Who asks who out first?

-Who is on top, sexually, and does that mean control, dominance and superiority or just a natural and pleasurable expression by either party? Ponder on this one carefully.

-Do women rule boardroom meetings? If  so, how do they actually do it? Is it by nurturing of the company and its employees or is it from a strong dictatorial male energy?

-Colloquially expressed, do women have more balls than men these days?

-How does a man truly feel in today’s male-energy-driven society? Does he raise the ‘machismo’ bar to a higher level? If not, how far does he turn it down without losing identity?

-Are men keeping up with women in dealing with their issues? If not, why not?

-How does a woman’s body truly feel in this way of life? It is truly serving in equality and security, which is why the male energy is used? What is it truly doing to the body? What are the direct and indirect symptoms of this imbalance? How does a woman stand today and what is the glorious way of being that has been lost?

We know breast cancer is out of control and energetically from an esoteric point of view this is caused by the lack of nurturing a woman has towards herself. Women, at best, are today great nurturers of others, but not of themselves!

-So have women truly won equality? If so, at what expense?

Or has equality not truly shifted because in truth the world is only recognizing the male energy as the dominant source and thus, the only expression that is to be rewarded. (Benhayon, 2006, p.245-9)

Beginning with some wackjob pseudo sci fi claptrap, the mutant messiah takes a heap of medical misinformation, mashes it with lousy generalizations and bogus dilemmas from the false gender war and works the gender divide to monopolize the affections and loyalties of his followers. The ‘equality’ he cites bears no relationship to the real world campaign for equal rights.

Any of the above first world etiquette problems can be resolved by grown ups of any sex via respectful communication and negotiation. In spite of Universal Medicine portraying itself as a health service or as a tax exempt College promoting harmonious interaction between human beings, those interpersonal skills won’t be promoted at the Mens Health (Hand Over Your Balls, What’s Left of Your Mind & Gimme Your Money) Conference or the Psychological Well-being Cult Recruitment Drive. Rather, Serge Benhayon and the Esoteric clones preach sexist stereotypes, narcissistic self interest (self-loving choices) and passive aggressive refusal to communicate (stillness). When relationships break up as a result, dependent followers have more funds available to sink into the cult’s money for nothing services.

As long as the faithful are distracted by their gender based navel gazing, they’re oblivious to the scam.

Benhayon, S. The Way It Is, UniMed Publishing, Goonellabah, 2006