Esoteric Stalking – how dare you ask me to stop harming people!

Universal Medicine cult denial knows no bounds. Almost two months ago, Rebecca Baldwin went postal falsely accusing us of falsely accusing Serge Benhayon of abusing patients.  The usual apologists lined up to defend him in spite of photographic evidence of Benhayon teaching inappropriate touching of sexual abuse victims to hundreds of his cult struck followers and calling it ‘healing’. Only Serge’s investors are able to look at those images and not see the wrong. The worst sex abuse deniers are the health professionals associated with the cult, who know that such conduct, if performed by a health professional, is mandatorily notifiable. It occurred to me that his professional apologists couldn’t possibly be aware of the images, otherwise they wouldn’t defend him. So I sent a few of them an email to make sure, and to ask them to stop promoting a sexual predator. The response? One of the precious sourpusses, Dr Rachel Hall of Evolve Dental Healing, Kenmore, tried to have me charged with stalking. The email exchange that had her scurrying to the police follows in its entirety.

Sourpuss is holding up the reputation of the feel-good fascist feminine bullies. Is it any wonder other victims won’t come forward?

It appears you are unaware of images of Universal Medicine head, Serge Benhayon, inappropriately touching women and calling it ‘healing’ for sadness, sexual abuse and sexual dysfunction.

Your advertising claims you are an accredited Esoteric healing practitioner, which means you have the Sacred Esoteric Healing workshop manuals which contain the images. It seems odd that you would overlook them.

I would like you to know that your continued promotion of Universal Medicine and Serge Benhayon shows grave disrespect to his many victims. His victims, including myself would like you to desist from promoting Benhayon because your status as a # misleads vulnerable people into thinking he and his organization have integrity.

I’ve attached a few of the most problematic images, including one image of Serge with his hand on daughter, Natalie’s bottom, and calling it a healing for sadness. Another with his hands on her chest. She is aged 14 or 15 in the photo. The other image, Deeper Femaleness, clearly shows his hand on a woman’s genitals, with text claiming it is a healing for sexual abuse.

I really have no issue with your beliefs, but I am seriously questioning the ethics of you using your professional status to promote Benhayon’s harmful enterprise. 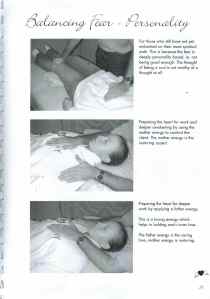 Please do not contact me again or name me on your blogs or social media platforms.

If it’s a criminal offence to contact you to show you evidence of Serge Benhayon’s molestation of sexual abuse victims, and to ask you to stop promoting a sexual predator, take these emails to the police and make a complaint.

Look at the images Dr Hall. Who is the criminal?

And by the way, we are not easily intimidated. If you got that name from the HCCC complaints made against Serge, he could be found guilty of harrassment and intimidation, and liable for prosecution with a penalty of imprisonment of up to 12 months.

Take it to the police, Dr Hall.

Today I went to the # police station at [address withheld] to make a complaint to police about your unacceptable behaviour towards me. I spoke to SCSO XX about your behaviour and XX informed me that in his professional opinion you may be committing a Criminal offence of Stalking and he is happy to take my complaint and have local police attend your home address or work place to interview you and if required place you before a Court to have you convicted of this Crime and a restraining order issued against you.

XX suggested that I should Firstly send you this  LAST email message stating categorically that I no longer want you to have any further contact with me or any contact from any of your friends, family or associates in any way shape or form and that this includes but is not limited to the following means of communication:

Finally a copy of this email is being held on file at the # police station.

Failure by you to immediately comply with my polite but determined request to cease contact will result in me informing SCSO XX to proceed with my complaint of Stalking against you.

XX or another police officer may call you shortly after your receive this email to confirm the validity of this message or you can call XX at his police station on ___.

My entire correspondence with this sex abuse denier was these two emails, roughly five weeks apart. She’s flattering herself if she thinks I’m interested in corresponding with her, and I only bothered with the second because she replied addressing me with the name of a HCCC complainant. Universal Law has been using that name in legal threats against some individuals and groups who’ve corresponded with me for some months now. How did they get it, if not from a HCCC complaint Serge had to answer to? And seeing we’ve been doing their enterprise some damage for some months now, exposing their secretive practices, why haven’t they mounted a defamation action. If we’re that bad, and criminal as they like to tell everyone, what’s the delay?

Anyway, I had no intention of carrying on some pointless correspondence with Sourpuss. She’s not that fascinating.

Perhaps it was a miscalculation to tell her to take it to the police. From what I know of the police, they dislike having their time wasted, and they hate perverts, so I was surprised she was taken seriously. Who knows, she may have stamped her little foot. The conversation with the officer was short, 90 seconds, tops. He called, told me I’d be getting an email explaining what stalking is, and not to contact Dr Hall again. I said ‘I sent her two emails’, he said ‘don’t send her anymore’, I said ‘okay’, and he said ‘Bye, have a good day.’

Anyway, I was so overwhelmed and flustered by the experience, I nearly couldn’t finish my sudoku. Eventually I took it to the bunker legal team, and he described sourpuss as ‘touchy’, concluded it would never stand up in court, and then rolled over and went back to sleep.

A couple of hours after the call from the nice officer, Rebecca Baldwin jumped on the ‘stalker’ bandwagon and sent Princess an email using this blog’s contact form. Again she addressed her using the name of the HCCC complainant. I imagine she wanted us to reply so she could scurry to the police too. Her scary email is as follows:

Name: Rebecca Baldwin
Email: We could post it, but we’re not as low as UM cult members
Comment: [Name of HCCC Complainant]

I request you cease naming me on your blogs and remove all references to me that now exist. What you are doing constitutes stalking and harassment and it is a criminal offence.

Um, no Rebecca, it doesn’t and it isn’t. We’re responding to public statements you and your self-loving clingons are making endorsing, defending and promoting an abuser. What we are doing is exercising our freedom of speech to expose the facts and stick up for the victims who won’t come forward because they’re intimidated by the likes of you, Sourpuss, and the self-loving cult lawyers. Freedom of speech exists in democracies like ours as a safeguard against, fascism, exploitation, abuse and corruption – Universal Medicine cult specialties. We’re not in court right now because we have evidence for every bit of dirt we’ve exposed, and Universal Law knows it. 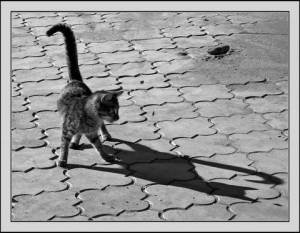 Stalked by one’s own projections

The disturbing aspect of both the sexual abuse denials and the piddling stalking complaint, is that UM’s feminine bullies are disgustingly disrespectful and demeaning toward genuine victims of abuse, and of stalking – minimizing seriously damaging and frightening offences.

Sourpuss Rachel Hall is doing what all hypocritically defensive cult members are doing – projecting. It’s not me she’s frightened of. It’s not me that’s stalking her, but the facts. Long after UM collapses, all the facts are laid out and we’ve moved on to other projects, Sourpuss and her cohort will still be jumping at shadows – a symptom of having to live with themselves.

11 Comments on “Esoteric Stalking – how dare you ask me to stop harming people!”