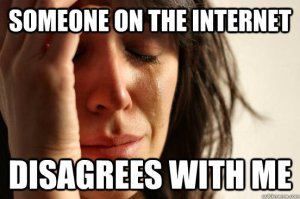 I imagine cult members, Rebecca Baldwin, Helen Simkins and Mystic Dentist Dr Rachel Hall of Evolve Dental Healing Kenmore Queensland who loves humanity as long as humanity subscribes to the UM cult, succeeded in their DMCA takedowns because we’d pasted their names with their verbatim denials as if they’d had the guts to come here and answer to the cult’s victims themselves.

We won’t do it that way next time, we’ll just quote them instead, like this endearing tirade from Rebecca Baldwin to our WordPress hosts, where she gives them both barrels of her soulful self-lovingness.

For your urgent attention — I recently submitted a report of abusive content through WordPress.com and received no reply – so I am now re-submitting it here: You are hosting a blog on your platform which is being used as a vehicle to harass, intimidate and defame me, my immediate family and a growing number of individuals who are a part of health and wellness community (Universal Medicine) in Australia and overseas. My sister has also been in touch with you and has to date received an an insufficient response from you in regards to this matter.

The ongoing harassment and defamation by the author of this blog has already been confirmed as such by Google Blogger and one of her blogs has already been removed in its entirety (universalmedicineaccountability.blogspot.com.au) from that platform.

Um no, Rebecca dear. Take a gentle breath. The only thing confirmed by the removal of the blogger Australian url listed above is Google’s piss weak attitude to freedom of speech in Australia, where a loophole in the law allows cults to censor blogs without a court order. The blog was never shut down in the US, because the US has more public protections against censorious scam artists. I purposely shut it down in the US so as not to diffuse our pageviews, and to optimize our position in Google searches. We didn’t pay an SEO expert to get us to the top of the Google searches either. We just wrote the facts.

She has since copied and pasted it to your platform and also opened a further defamatory site ( http://factsaboutuniversalmedicine.com.au ) (sic) – with this blog time targeting a broad cross-section of upstanding community-minded people across a number of professions, purely on the basis that they attend Universal Medicine events.This essentially means that the WordPress platform is harbouring and enabling activity which is criminal by virtue of the fact that it is harassing, menacing and offensive. I request that WordPress cease this and remove her blog in its entirety.

I would also request that you action the following points-

Remove comments that were not posted by me yet appear to be from me (she has copied and pasted them from another site, and then used them, without my permission, on her own blogsite, making it appear as if I made the comments on her blogsite, which I did not). The blogsite is nothing that I wish to be associated with, as it is maliciously designed to damage Universal Medicine’s standing, which is an organisation which I hold in the highest regard, and I do not wish to be seen as following a blog of that sort or in any way endorsing or engaging in the conversation that appears on it. Hence, the posting of the comments, seemingly by me on that blog, is entirely without my consent.

The below comments were not made by me (Rebecca Baldwin) on this WordPress site. and have been lifted (without my consent) from the following url: ORIGINAL LEGITIMATE COMMENT

Thank you for looking into this matter immediately, I look forward to your prompt response

Only an Esoteric student could make a distinction between the ORIGINAL LEGITIMATE COMMENT and the FRAUDULENT COMMENTS PLEASE DELETE, even though the ORIGINAL content was cut and pasted verbatim. Ah Rebecca, you truly are a parody of yourself. According to Rebecca, the same comment is LEGITIMATE on the propaganda sites and FRAUDULENT when juxtaposed with facts, and questions about her conduct and accountability.

The other priceless claim is for breach of copyright, as if we’re falling over ourselves to plagiarize her literary brilliance, lol.

Take another gentle breath Rebecca, and let’s work through this. Try to KEEP CALM. I’ve invited you to speak with me before, dear. I have a contact form on the UMA blog, and I’d be more than happy to discuss your feelings as long as you oblige by answering some questions, particularly about your participation in sexual abuse, and your opinion on adolescent girls staying Serge Benhayon’s home.

We’re not targeting anyone ‘purely on the basis that they attend UM events’. We’re too busy for that crap. We’re exposing a cult engaging in deceptive practices, insidious thought reform techniques designed to induce dread and dependency, so called ‘health’ practices that harm people physically and psychologically, sexual exploitation and abuse, financial exploitation, division of relationships and families, unlawful invasions of privacy, censorship, bullying and vilification. We’re targeting a group of people profiting from these practices at the expense of the vulnerable, including cancer patients, people with mental health issues, people with eating disorders, sexual abuse victims and children. In particular, we’re targeting professionals who are breaching their codes of conduct and abusing their status to endorse these harmful practices and assist recruitment to the cult.

Add that to your complaint next time.

Facts come with evidence, Rebecca, and facts are not abuse. Neither is disagreement. WordPress didn’t reply to you because they host millions of blogs, a good number of which are critical of corrupt, exploitative and abusive groups like UM. WordPress gets thousands of emails a day from righteous little bullies like you attempting protect their ill gained positions and lines of credit.

Exposing facts is not defamatory, Rebecca. Defamation occurs when people publish lies about you. If you’re going to get into a tizz about being defamed, stop defaming yourself through your own conduct. WordPress spells it out in their terms and conditions – if you have a case for defamation, take us to court, test our evidence and if you succeed, you can present them with the court order they require to shut us down. Otherwise, dear, they won’t shut us down because you want them to, and just maybe they looked at the images of Serge’s special techniques and decided you’re full of shit.

If you think we’re engaging in hate speech and we’ve intimidated or harrassed you, present the evidence to WordPress. Unlike UM, WordPress understands hate speech isn’t people saying they don’t like you or that you’re a bully or a bitch or presenting other facts. Authentic hate speech incites violence or includes threats.

If you don’t want to be lampooned, Rebecca, don’t make it so easy. We’ve asked you to account for your actions. No one here has threatened, intimidated, harrassed or menaced you, and certainly not on the scale that the Universal Medicine Cult is vandalizing lives, frightening children, fracturing and bankrupting families and engaging in a culture of sexual abuse and sexual abuse denial and apologism.

Don’t kid yourself, we’d love to shut UM down. But when that happens, it’ll be the law that does it, not us, and a well informed public groundswell rejecting the Livingness death and molestation package you so innocently describe as ‘health and wellness’.

And if offensiveness was a crime, Rebecca, you’d have been locked up for your self righteous participation in molestation and your brutal denials in contempt of people suffering because of UM, and Serge would be in the gulag as well.

Keep up those gentle breaths dear, and if you find you’re still in an Esoteric dither, go sit on a symbol.