← Newsflash! The UniMed cult accuses hate-bloggers of fiddling our numbers
Esoteric Judas – dealing with dissent in the Universal Medicine cult →

Background: In 2012 many of us witnessed how a small group of hate-bloggers captured the attention of the local and national media with blatant lies and false reports of diet and lifestyle concerns about those who attended Universal Medicine presentations. Subsequently a spate of error-riddled and defamatory stories, were pumped through the usual and predictable channels. While there were some who were undiscerning enough to consume the junk-media, there were many more who saw right through it and in many ways it did nothing to disrupt Universal Medicine’s service offerings. Indeed, as always, due to the huge demand for its’ services, Universal Medicine continues to steadily go from strength to strength.

In many ways it did nothing to disrupt UM’s offerings?

Apart from the ways it DID disrupt them. The cult wiped the Esoteric Breast Massage site and rebranded it. Esoteric Breast Massage is dead. Universal Medicine’s cult pimping service, Esoteric Women’s Health is a non starter, with little in the way of saleable product. Rebecca herself launched five propaganda blogs where investors attempt to paper over the lies and abuses with platitudinous fictions about ‘healing’, but it hasn’t slowed the decline. Anti free speech cult front Real Media Real Change flopped. Several professional apologists have had their wings clipped – called to account by employers and regulatory bodies. A couple were stood down from  paid positions due to their affiliations with harmful, hate ridden death cult. Numbers are down at all events and were down 50% at the last UK retreat.

It wasn’t the bloggers that captured the attention of the media, but UniMed’s putrid practices. Denial and blatant lies aren’t indicative of ‘strength to strength’, Rebecca.

In effect the hate-bloggers who instigated the media attention were left unsatisfied and as their numbers dwindle, their anonymous online smear campaign has become increasingly outrageous and questionable.

You call it hate, we call it fact. You’re right though, we’re not satisfied, and while we have a lot of actions in motion, we believe Serge should have been prohibited by now. We’d also like more of those affected by the cult to take action, but there you have it. Numbers aren’t dwindling. Our support base is growing and so are our site stats. And your false accusations of false accusations brought about a surge in our pageviews, so thx.

We agree our content has become more outrageous and questionable since we’ve posted more of Serge’s quotes and writings – the Messiah’s own material you won’t allow into your publicity. Not to mention those images.

Their latest lie, is that Serge Benhayon’s healing techniques are sexually abusive. Anyone who knows Serge Benhayon knows how patently ridiculous that claim is – straight from the same ilk of the ‘Serge Benhayon gives Breast Massages’ lie that was made famous by an easily manipulated press who last year pimped out its pages to become a mega-phone for the hate-blogger’s lies and hate-campaigning.

So this is a lie Rebecca? 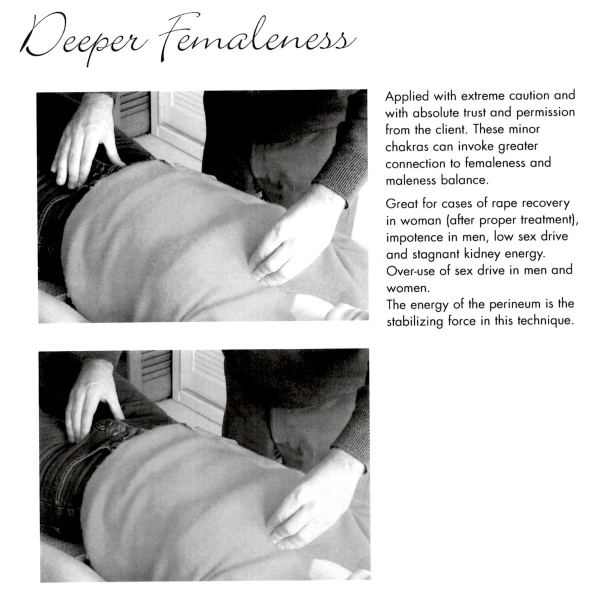 Knowing the seriousness of giving airplay to false allegations of sexual abuse, especially where not a shred of evidence accompanies, the press have so far been wise enough to not touch these baseless and false accusations but unfortunately it remains on the hate-blog – a blog already once removed in its entirety by Google, because of its defamatory content. Of course the Internet being what it is, it has simply been cut and pasted to a new blogging platform and so the defamatory content remains.

Serge Benhayon having himself photographed with his hands on genitals is more than a shred of evidence and you’ll find the press, the HCCC and the police agree. All that’s missing is a complainant. Another shred is the fact I’ve been in a treatment room with that bastard, where I assertively told him I did not want an ovarian reading, but was put under considerable pressure to submit.

Look at the image Rebecca and answer the questions. We’re demanding answers and we want you to be specific. Is the touching in the above image in any way appropriate in any treatment room situation for any reason?  State the reason. We know the technique has been taught at Sacred Esoteric Healing Advanced Level 2 workshops. We know you participated and we know you’ve had your hands on other cult members genitals. It’s no wonder you’re defensive, and it’s no wonder you don’t think of it as abuse – because you’ve done it too and you think you’re SO superior.

We have witnesses. Are you going to deny you touched other student’s genitals?

We know cult members take their daughters, including small children, to Serge for ‘healings’. Is it appropriate for Serge to perform that technique on children? We don’t think it’s appropriate he performs it on adults, but if you think it’s not abusive for adults, do you think it’s appropriate for little girls? Tell us Rebecca, why is it necessary for you or Serge to touch anyone’s genitals? Why haven’t you denied he does it? Why don’t you accuse me of lying about the ovarian reading? Did he give you ovarian readings? Has he or has he not done the same to countless women? Has he asked about your sexual history? Has he touched your genitals?

You insist Serge is a ‘gentleman’ of utmost integrity, but you don’t deny he touches genitals. You and your colleagues only deny his healing techniques are sexual abuse. If the hands in the images belonged to anyone outside the cult, the Serge Brides would be ranting themselves silly via Facebook and ‘truth’ blog activism and plugging a pissy petition to have him stopped.

And so as the hate-bloggers hit a new low, those that know the truth will steadfastly address the lies.

Never mind the lies Rebecca, – that’s the cult’s specialty. We want you to address the facts. Answer the questions.

Using false allegations of sexual abuse smacks of a very insidious brand of malice, as it attempts to play on people’s worst fears about men.

You’re shameless. Playing on fears of men? You’ve written misandrist accusatory blogs in defence of a sleaze artist who has generated a doctrine of misandry. We’re talking about the revolting actions of Serge Benhayon and men and women like yourself, who’ve enabled him and participated in the abuse and are attempting to bully victims into not complaining by denying the inappropriate touching is molestation.

The only people who think the touching pictured above is acceptable are Universal Medicine cult apologists. Everyone else is against you.

In an age of Internet anonymity easily abused, this is a particularly cowardly act. In this very courageous piece by Kyla Plummer, she exposes the absurdity of the lies that continue to be perpetrated by an anonymous few.

I’m not anonymous. My name is on complaints Serge has received. The police, the HCCC, the media, a number government departments and regulatory bodies and all the public representatives in the Byron Bay region know who I am. What is cowardly is that Serge doesn’t defend himself and he hides behind shrill bullies like you, and the smoke screen of your sister exhibiting her private life on the internet.

If our content is defamatory why hasn’t Serge sued us? If the media reports were defamatory and error ridden, why didn’t he sue the media organizations?

We’re ready to roll. You bring your cult lawyers. We’ll bring the evidence, the facts, the witnesses and the TV crews.